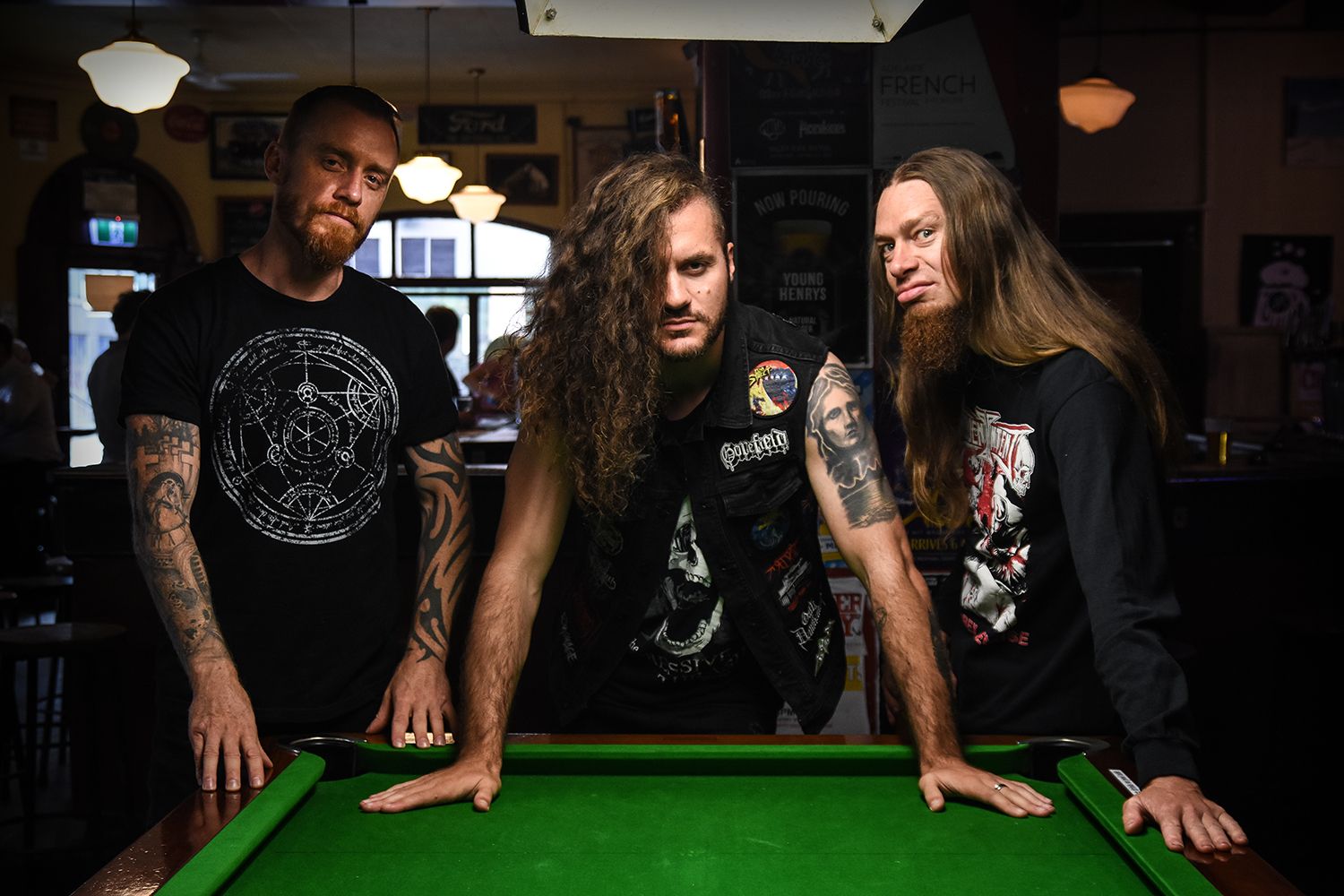 Who are the band members that make up HIDDEN INTENT and what other bands have they played in previously or currently?

Lastly there’s myself (Chris) on bass/vo-kills/management/flight booker/beer delegator. I used to play in Obsidian Aspect & Beyond Mortal Dreams when I was more into death metal and stuff, Abyzmal (terrible bloody name but another thrash band I played in), Beyond The Oblivion and I still occasionally play with some mates in a Sepultura Tribute called Troops of Poon, I mean Doom!

Labels & webzines often like to write at the end of a bio or review with the term ‘for fans of’ such & such bands. But really I think the band itself should be telling us this. So enlighten us if you would. HIDDEN INTENT is for fans of?

Basically, we fucking love thrash metal (almost as much as tits), it’s a heaps fun genre to play ay. We want to write our take on the genre infused with Aussie as fark culture (to a degree, with some seriousness here and there)! Other motivations include copious amounts of beers, partying and taking the piss really. Achievement wise we want to play killer overseas festivals and tour with some of our favourite bands.

Who is responsible for writing the headbanging encouraging thrashage HIDDEN INTENT have churned out on the new album ‘Dead End Destiny’? Musically & lyrically?

We write collaboratively together, usually for each song one member has led the music side of things more so than the other. For this album we went to our mates studio out in the sticks with no distractions and heaps of piss. Sometimes we’ll pick structures of other favourite bands tunes and write riffs around that. Other times we’ll have a song in our heads and Phil churns it out on guitar and brings it to life, he’s very gifted like that. Lyrically I write most of em’ but for this album Phil and Paul have contributed more so than ever. I do have a mate who touches up our lyrics too.

There are two cover songs on this album, one an interesting choice in The Chats ‘Pub Feed’. The other, a fairly obvious choice in Slayer. I assume Slayer is a tilt of the hat to the masters, but why The Chats?

Is it because Adelaide is particularly good at pub feeds, or you all wish you had haircuts like The Chats vocalist?

You guys have adopted a bit of an ocker vibe to your image? Why so? Were you all born on a farm in rural SA & talk that way anyway, or you trying to be the most Aussiest band of all time?

I’m personally a huge fan of Mick Taylor of Wolf Creek so as we wrote more Aussie-inspired songs (Drop Bears Are Real) I introduced the flanny on stage and speaking more like Mick in between songs. I imagine myself as Mick if he sang in a thrash band and go with that for inspiration. I guess the ocker vibe just suited the direction of where the music was going and I think it suits our small community that we’ve built around the music.

The artwork for the album has a very Aussie flavour with Paul Hogan, crocs, tinnies, koalas (or should I say drop bears) & even Pauline Hansen. Who do we have to thank for this striking work? Had you given the artist a concept of what you are after as an album cover or have you given the artist free reign?

All Things Rotten have done a sick job capturing what we wanted in the artwork, it was great getting someone overseas who only knows of the typical Aussie icons. We gave him a drawing of the rough idea and he sketched along accordingly until we were happy as Larry.

If a metal punter is reading this interview & is teetering on the edge of buying your album, what would you say to them now to convince them to part with their paypal money or credit card & grab themselves a copy?

Oi mate do you like thrash? Particularly the big 4? Then buy our farken album and support independent Aussie thrash, get a dog up ya.

Favourite Australian bands and / or releases?

Series: Wolf Creek Series - Seasons 1 & 2, prefer these to the movies at times.

Apart from Jon Schaffer, if you could pick 5 musicians to storm our capitals parliament house with, who would they be? 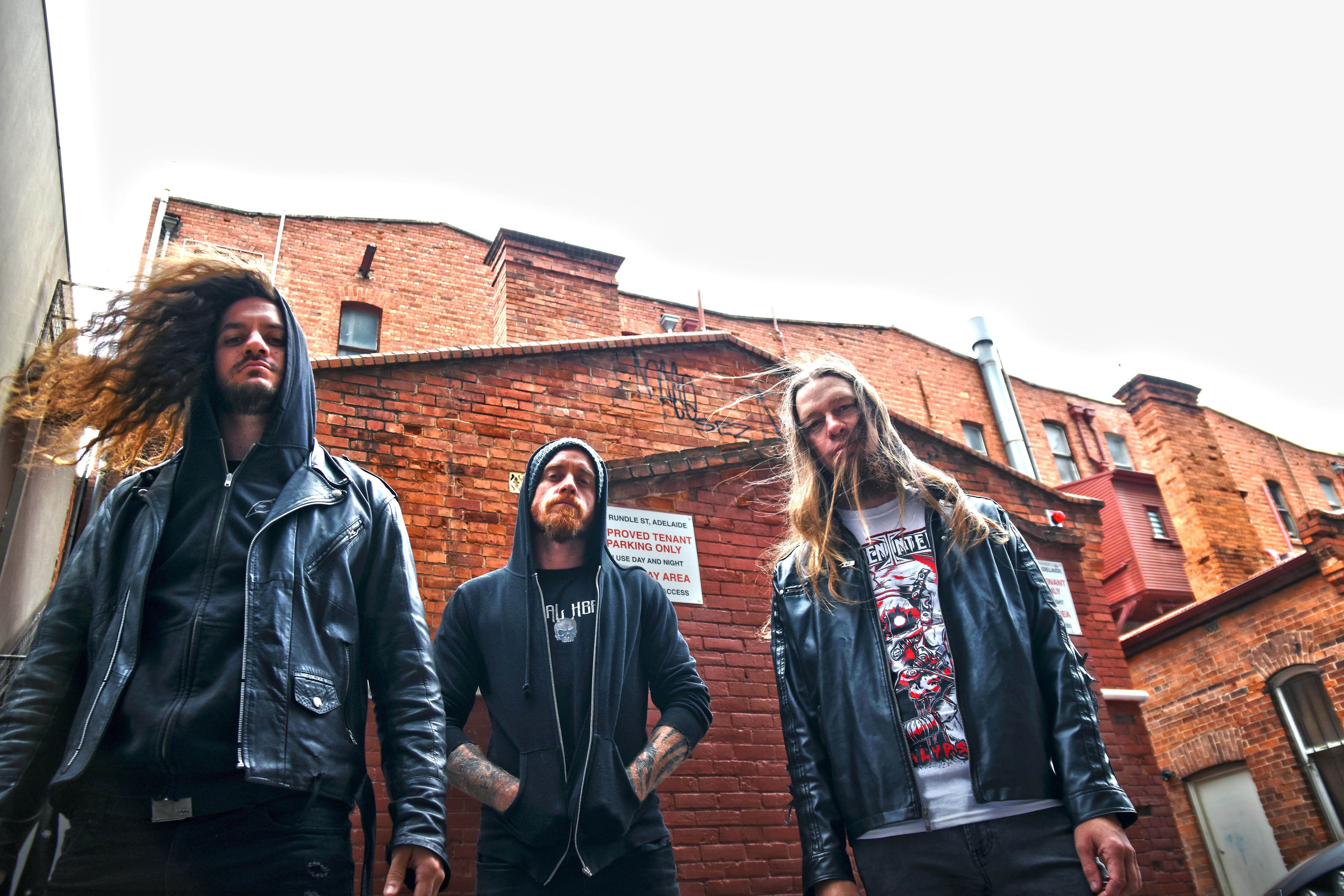